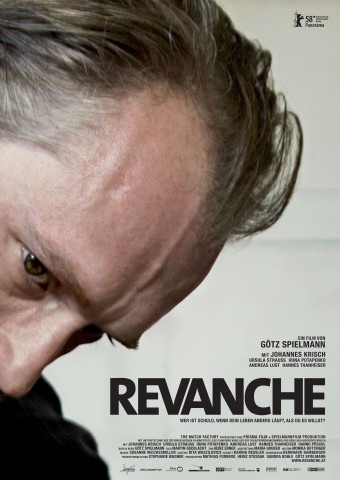 A nature scene. Late summer. A small lake in the woods. No people. Silence. Not far away, a newly built house inhabited by a couple: Robert (Andreas Lust) and Susanne (Ursula Strauss). They live an ordinary life like so many other people. Meanwhile in Vienna. Nightlife, red light district, the world of prostitution. Here money rules. Most people have jobs that barely let them scrape by. Like Alex and Tamara (Johannes Krisch and Irina Potapenko).

She is a prostitute from Ukraine; he, the boss’ errand boy. They are lovers, but they have to keep it a secret. Employees aren’t allowed to engage in amorous relations. They want to escape this life, but they need money first. Alex devises a plan to rob a bank in a little village out in the countryside. Tamara wants to come along, and he reluctantly agrees. Everything is going exactly as planned until a policeman happens to walk up: Robert. He fires a few shots at the getaway car as it speeds off and hits the young woman. Overcome with despair, Alex leaves the body behind in a forest clearing. He lies low at his grandfather’s place.

The old man lives on a desolate farm at the edge of the woods. Silent and withdrawn, Alex begins the task of chopping the firewood for the approaching winter. He is consumed with pain, grief, and the hate he harbors for the man responsible for Tamara’s death. A lake in the woods, this is where Robert goes to be alone. Now he comes here to try to sort out what happened. Alex observes the policeman, spies on him, follows him as he goes about his daily routine. And he meets Susanne, the policeman’s wife. The lives of all these people will change as a result of Tamara’s death – more radically than they suspect. And autumn comes, just like every year.

Nominated for: Best Foreign Language Film of the Year